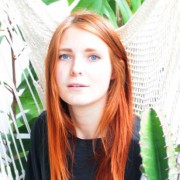 Marian Cousijn makes a plea for a more diverse art history. She recently made an extraordinary discovery on Instagram that she wants to share with you.

Instagram is a wonderful way of discovering new art. For example, a painting recently popped up on my feed (via art historian Jerry Saltz) that I just can’t get out of my head. It is a pitch-black portrait of a man wearing a hat. His silhouette is barely distinguishable from the equally black background. The whites of his eyes loom up in the darkness, and below them two rows of white teeth.

KERRY JAMES MARSHALL, “A Portrait of the Artist as a Shadow of His Former Self,” 1980 (egg tempera on paper). | Steven and Deborah Lebowitz. Photo courtesy MCA Chicago

Despite the broad grin, this is an unnerving image. It looks a little too much like a racist caricature: the stereotype of the black man with a mischievous/cute smile. The title, A Portrait of the Artist as a Shadow of His Former Self, makes that smile all the more uncomfortable. Kerry James Marshall painted this self-portrait in 1980. He was twenty-five years old and missed something during his art-history studies: other people who looked like him. Just randomly open any art history reference book and you’ll see what he meant. Throughout the centuries there has been hardly any visibility for people of colour – not as artists and not as the subject of works of art. Diversity is hard to find: the canon of mainstream art history remains dominated by white men.

In the film above, made during the installation of Marshall’s solo exhibition Painting and Other Stuff (M HKA, 2013), the artist explains why he has depicted a group of black youths drinking tea in a domestic interior:

‘They’re just doing… normal stuff. When you imagine what black people are doing, that’s not what most people imagine.

Because every time you hear about what black folks are doing, its either crime or drugs. When you think about young black men, you don’t think about them sitting around in a living room, chatting with each other.’

Marshall’s works not only fill in the gaps in art history, they are also extremely beautiful. They are action packed, and the saturated colours, strong compositions and intriguing scenes hold your attention. The paintings are not an attack on established art history. If you look closely, you will see that the works have a certain respect for the old masters of European painting. But Marshall shows that it is certainly time for more diversity.

Marshall’s solo exhibition Mastry is on view at the Museum of Contemporary Art in Los Angeles until 3 July. If you haven’t got time to pop across the ocean, you can view all the works here.